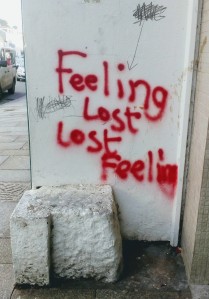 I’m delighted to announce the formation of Dead Unicorn Ventures. This is a group of three – Cat Astley, Teresa Knight and myself – who have become tired of nothing of substance happening for the Queer community in Cornwall, and nothing at all happening in Penzance! As will be obvious from our name, we want to make a point without being po-faced about it and I’m hoping people will get the spirit of what we’re trying to achieve. We have spent the last month or so working on our first event, Swallow Your Pride, which will take place at the Acorn Arts Centre in Penzance on 26 July 2019. This event showcases a real diversity of Queer talent and I cannot express how excited I am at the line-up we’ve managed to book: The Tribunes are from Penzance and play punky rock with a Socialist agenda, Jim Causley is one of the country’s brightest folk singers and musicians and Joelle Taylor is an extraordinary performance poet who’s toured many countries but has not, as yet, ever appeared in Penzance. I’ve worked with Joelle twice before – at the inaugural Queeruption festival in 1998 and at The Poetry Society Cafe in 2002 and I’m finally making good on my promise to get her a gig in West Cornwall! There may also be some comedy and a performance/reading of one of my stories and hopefully an art exhibition elsewhere in the town to run alongside the event, as well as the possibility of a programme/fanzine to be made available on the night. A Facebook page is in the process of being constructed to give details of what we’re doing. It feels like the right time to be doing this and I’m happy to bring my punk sensibilities and experiences to this project. May it lead to many wonderful things.

All text and images © Julie Travis 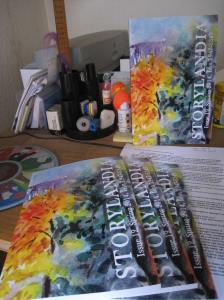 Some writing updates: The Man Who Builds The Ruins has been with a couple of editors and was rejected immediately by both. It’s always possible that the story just isn’t up to scratch but after a lot of revision I’m extremely happy with it – perhaps it’s time to put it aside for a month or so and come back to it more objectively. If I’m still happy with it I know it will find a place somewhere. But possibly the ‘problem’ is that the piece doesn’t fit to any genre. I had to describe it for one magazine and chose ‘horror+fantasy’ (there was a list), although I’m not sure it would sit comfortably in that place. There’s a small element of horror in the story, but it could also be described as Weird/dark fantasy/slipstream. Someone once said I wrote ‘bloodstream rather than slipstream’ fiction. If one has to put a label on these things… I came up with the term ‘transgenre’ whilst working with performance poet Joelle Taylor in London – with many of the lesbian community at that time beginning to describe themselves as transgender, it seemed appropriate and supportive at the same time.

As for Rebecca Shadow and the Winter House (a title that may well change) – I’ve done a lot of work on it recently and the first draft is almost finished. The last, fairly hefty section of it, needs to be typed up, then it’ll be in a fit state to begin rewriting. After not touching the manuscript for three months while I wrote TMWBTR, I’d forgotten the pages and pages of longhand that I’d done for it. It’s in a much better state than I’d thought. I’ve read a lot lately about writers playing music while writing, and there’s a fair few that think that only silence will do – that perhaps it’s as much of a ‘false’ influence as writing while drinking or on drugs. I respect their choice; silence certainly has its place. Having the window open and hearing the repeating pattern of the chaffinch singing outside has its place, too But state of mind-changing influences of various kinds can unlock doors, if done wisely. It won’t create an imagination where there isn’t one.

Horror writer and now columnist for Black Static magazine Lynda E Rucker recently wrote about hearing Clive Barker make a speech back in the 1990s about The Art of writing and how sacred it was, presumably arguing against writing any old rubbish in order to make money. Rucker dismissed Barker with a very realistic wave of the hand – nearly all writers have jobs of one sort of another in order to survive, and if that included writing for money rather than Art then it was just practical.

I have to agree with both of them. The odd payment for a piece of fiction is very much appreciated but doesn’t usually cover more than the cost of printer ink. I’ve had various jobs over the years, all in the public sector for political reasons, but for the last decade or so I’ve been declared unfit to work due to having had several nervous breakdowns. I still managed to keep my head above water financially, writing bits and pieces for the gay press when I was living in London and have got used to poverty, going without shiny things (apart from the odd cd and book) as a matter of course and actually not wanting or needing much, but the vicious welfare cuts by the Tory government now means I’m in an untenable financial position. Not yet Foodbank poor, but certainly picking-pennies-off-the-pavement poor.

However, Barker is right in that I have been striving to write fiction that grabs you and propels you Elsewhere, that makes you think about the darkness of Life, that celebrates the Other, the misfit, the weirdo (and sometimes this simply means having a story centred around female characters). Whether or not I achieve that is arguable, but that’s what I aim for. Anything less is a waste of trees. The articles I wrote for the gay press were all things I was passionate about: political activism, debt, mental illness, self harm, interviews with bands, performance poets and legal activists. But now things are so bad I’m remembering what my dear, departed mother kept telling me to do: write crap. That I could turn my hand to light fiction that might be meaningless to me but could make me enough money to allow a bit of financial breathing space. It was something I always refused to do – writing is an Art, and trees are not to be wasted – but my principles won’t pay the rent. So I’ve begun some light fiction for a magazine that, shall we say, appeals to Middle Englanders (if that term means anything at all). I’ve read some of the fiction in the magazine and was bored almost to tears. Light is an understatement. Still, it gave me the feel of what was needed, so I’ve sketched out a story and am working on a first draft.

The submission guidelines state: nothing upsetting or frightening, nothing supernatural. It took a couple of weeks to get into that kind of headspace (bearing in mind I’m also still working on a dark fantasy story), but I’m there and will give it my best shot, submit it and see what the reaction is. The discipline needed to write in a completely different genre is good for me and I’ve got years of writing experience – I should be able to give it a good go. I’ve changed genres before, to a limited level, writing slash fiction (about TJ Hooker!) on the Barbelith forum and my articles for The Pink Paper and Diva magazine were based on their house styles. Should I get something published in this magazine (and I know it will be far from easy to do so), I will bless the money that comes with it, but I don’t know if I will ever forgive myself. And the trees certainly won’t.