It’s been an incredibly hectic couple of weeks. As you can see, Black Static #53 is out and includes a comprehensive review of Storylandia 15, as well as a load of great looking reading. Peter Tennant comparies the collection to the likes of Arthur Machen and Algernon Blackwood as well as Clive Barker, and highly recommends it. Illustrious company indeed! Many thanks to Peter for taking the time to do this. I so often operate in a vacuum, it’s extremely interesting and helpful to get an idea of what other people think of what I do. Do I need this kind of validation? As much as anyone else does – I yo-yo between brimming confidence and wild self-doubt, and I was a bit concerned that some of what I now write is just simply inaccessible to the rest of the world.

Following on from the review, I’ve been interviewed by Peter for Case Notes on the TTA Press website. He asked some good questions and I gave some very honest answers. When I first began writing, one of my ultimate goals was to be interviewed. Twenty-three years later, it’s actually happened! (as a writer – I’ve been interviewed as a musician and as a political activist). Of course, what I really meant was that I needed to be heard and taken seriously and the writing provides its own voice. The interview will either get people very interested in what I do or will send them running for the hills.

Andy Martin’s anthology, Fast-Clean-Cheap, is now at the proof-reading stage and is due to be published in September this year by Lulu. It’s likely to be an eclectic collection, with my two pieces probably the only ones inthe horror/dark fantasy vein. Expect the unexpected from Andy!

Finally, I’m very happy to announce that Wapshott Press have asked me to do a second short story collection, for release around the end of 2017. I’ve two or three stories already completed for it, plus a few tricks up my sleeve regarding some older (almost unseen by anyone else) work and two or three new stories to write for it in the next year. The working title for the collection is We Are All Falling Towards The Centre Of The Earth, and I have some thoughts for the book’s cover, too. Once again I have to thank Ginger Mayerson and all at Wapshott Press for such amazing support and faith. 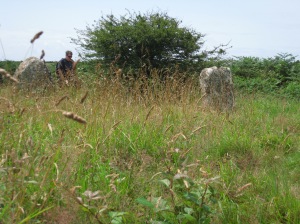 After what has been a long break between posts, it’s time to do an update. Writing fiction has been almost impossible since Ian’s passing, as it was after my mother passed away, so I have been concentrating on re-drafting Pig Iron, to the point where I think it’s now ready to go for publication. The Man Who Builds The Ruins – the story inspired by Ian and his partner Mikel’s agroforestry project in Northern Spain – has been rejected yet again. I read it through, prepared to ditch the story if necessary, but instead I think it’s one of the best stories I’ve written, so I’ve made a few changes to the prose and am hanging fire on what to do with it next. It does have a very occult/’out there’ feel to it, so perhaps horror/dark fantasy publications are not the right places to send it (although it was nearly placed in two publications).

On a very different note, I’ve been chasing Penguin Books for eight months for an interview with Sue Perkins, but have just been turned down due to her ‘full schedule’ (her memoir, Spectacles, is out in early October). This was to be for Curve magazine in the United States and they are as disappointed about this as I am, I think – Sue has some forthright opinions and would, I think, make the subject of a good article. I’ll be writing to Sue direct in a final attempt to arrange this – if she doesn’t want to do the interview, I’ll accept it and move on. But I do need work that might pay as much as anyone else does!

Otherwise, I’ve been working on Ian’s page for this website. As you can imagine, it’s been a difficult task – plenty of material to choose from, but very emotional to put together, but it’s nearly there. I’ve also been putting Ian’s texts and emails into a document for my personal records, which has proved even more difficult to do! But out of all this grief has come some positive things: contact from some Russians who corresponded with Ian and are constructing a site in his memory, and an email from Phil and Layla Legard of the Hawthonn project, based around Jhonn Balance, grieving, and a journey from Balance’s home in Weston to his resting place at the hawthorn tree near Bassenthwaite Lake. I thank them all for their kindness and generosity.