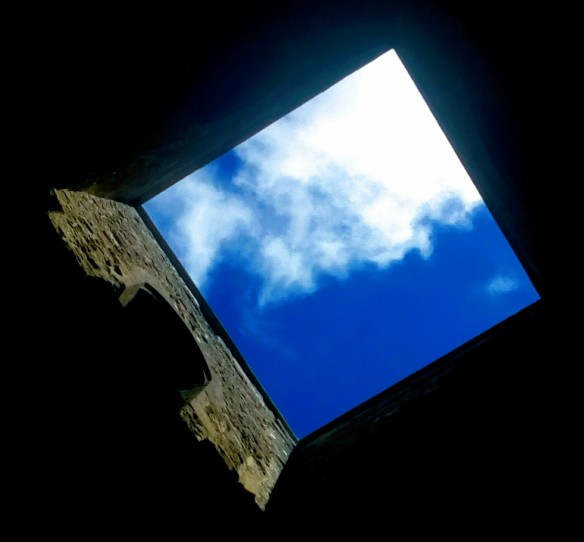 I’ve been talking to Ginger Mayerson of Wapshott Press and a few things about the new collection are now more or less settled. The title will be We Are All Falling Towards The Centre Of The Earth and should contain either seven or eight stories. After a week away at Avebury, I’m now back working on the last two stories – Beautiful Silver Spacesuits and March Of The Marvellous. ‘March…’ will be rather different to the rest of the stories – it began as an excerpt from my first novel The Gathering, which still needs a huge amount of work on it, but the piece is being developed into a stand-alone story. The original idea is probably the best part of a decade old, but it’s always been waiting in the wings to hopefully see the light of day.

As for the proposed feature on the film Rebel Dykes for Diva magazine – the film still needs funds in order to be finished and released, which I dearly hope will happen eventually. The story behind the feature is quite a farce, however, where I suspect I’ve suffered both ageism and disablism at the hands of one person involved in the film’s production. Diva’s editor recently left the magazine and to date the Deputy Editor has not responded to my email about the feature. I may name names and tell the full story at some point, but I now have no idea whether this feature will ever be written. I send my best wishes to everyone else involved in the film.

All images and text © Julie Travis 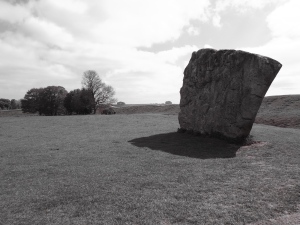 My first trip to Avebury and the surrounding area was even more powerful than I thought it would be. The huge stone circle, which I’d first seen forty years ago in the excellent children’s tv drama Children Of The Stones, really has to be seen to be appreciated. The stones are colossal. I felt swamped by them, but not threatened. My first view of them – in sunshine, above me, as I walked along a lane through the village – was intensely emotional. As it was at the end of the week, when, in the rain, we visited them again and said goodbye. The site was quiet and there was plenty of time to spend, undisturbed, with the ancient giants. I stood in the main circle and looked up at the henge. I could visualise a line of people all along it, observers to the ceremonies taking place. I haven’t read anything to say that’s what happened, but that’s certainly what I felt. The stone avenue, leading down towards The Sanctuary, is quite majestic despite having many stones missing. Back in the village, I tried to get a sense of the multiple circles. I wasn’t aware that there were circles within the main circle, that is, until I dreamt of taking part in a ritual in such a place. The next day I saw a book which included an illustration of Avebury in its complete state and I was amazed – it was the place I had dreamt about the previous night. 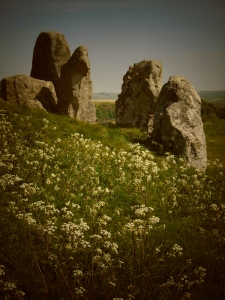 Nearby Silbury Hill and West Kennet Long Barrow were equally deserted, apart from a pair of swallows who flew in and out of the barrow, their calls echoing around the chamber. I was pleased to find the chamber open and freely accessible. We cleared away a few tealights left by a previous, thoughtless visitor and enjoyed the cool silence. At each of these places the overriding feeling was of peace. 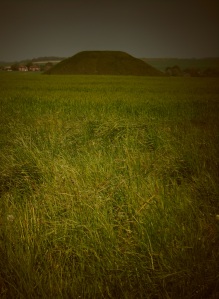 A day was also spent in Glastonbury, climbing the daunting Tor and recovering afterwards in the Rainbow’s End cafe. The town, which I hadn’t visited for decades, is as powerful and spiritual a place as Avebury. The trip will inevitably have an effect on my fiction – for once I didn’t take any work with me, but it’s something I never stop thinking about, and I made a few notes during the week. I was doing my best to take a quick break from writing, as it’s been so draining recently, but, a few days after my return, I’ve redrafted The Spoiler and it’s very close to being complete.

All images and text © Julie Travis, apart from the title, taken from Derek Jarman’s film. 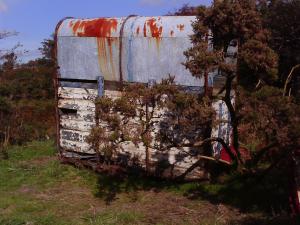 On the haunted bridleway at Minions, Cornwall

This year’s Meltdown Festival, curated by Antony Hegarty, is going to be incredible. And very, very queer. Not only does it feature Diamanda Galas and Vaginal Davis (a drag performance artist I did the stage lighting for at San Francisco’s Dirtybird Queercore Festival in 1996) but Cyclobe, doing only their second live performance. Cyclobe are ex-Coil members Stephen Thrower and Ossian Brown. (One of their credits is providing music to The Dark Monarch, the Tate St Ives’ late 2009 exhibition on the occult in art, which was probably the best thing the gallery has ever done.) The Derek Jarman short film Journey To Avebury will be shown (amongst others), with a new soundtrack (the original was done by Coil). (I spent many, many hours in the Scala Cinema a couple of decades ago watching Jarman’s films and was lucky enough to see his house at Dungeness. Jarman was very ill from AIDS at the time and I have no idea if he was there, but it felt like sacred ground.) Plus countless other events. It’ll be hugely inspiring: one of the very few things that could tempt me back to the ‘vortex of bad energy’ that is London.

Meanwhile, back in the real world of fiction: Pieces is finally finished and I’m wondering where to send it to. I really want to start picking magazines that are are a bit more ‘out there’. Obscurity is something I’m happy with; invisibility is not. And, despite one of the golden rules of not having long story titles my new story is now renamed Darkworlds Pt. 2: Everything You Dream Is Real.