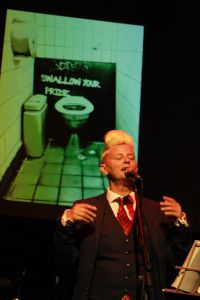 Dead Unicorn Ventures was founded by Cat Astley in September 2018 as a response to the lack of a scene of any kind for the gay community in West Cornwall. She recruited me for my background – I’d organised gigs and produced fanzines in my youth and co-founded the Queeruption Festival in London in 1998. My contacts and Cat’s vision meant the framework of an event (Swallow Your Pride) was organised within 24 hours. We also agreed that a physical zine – in the spirit of the original punk zines of the 1970s – would be another way of putting our particular view of the world across and so Dykes Ink was born. The ethos behind each project was to create intelligent, thought provoking, irreverent material with a sense of humour.

Swallow Your Pride took place in July 2019 at the Acorn Theatre in Penzance. We’d spent months promoting the event, which had a line-up that would appeal to the literary set in Penzance as well as the gay community: Devon singer/songwriter Jim Causley, Radio 2 Folk Awards nominee on several occasions; The Tribunes, a Penzance based Socialist rock band and Joelle Taylor, performance poet with more plaudits than you can shake a stick at who’s toured much of the world to huge acclaim. We also did a lengthy fly-posting campaign around Penzance, one of which provoked someone enough to deface it as ‘homophobic’, which we found interesting.

We were battling on two fronts: a perception of gay people as a bunch of glitter-covered, rainbow obsessed fluffies and kicking at the door of the literary set who, we found out, had no idea of the worth of anyone outside their little bubble. The gig went really well and was even attended by Penzance Mayor Nicole Broadhurst, who, as a young, Black woman, was pushing at some boundaries of her own in a job usually reserved for old, white men. But it rather broke us financially and we decided to focus on the zine, which was published to coincide with SYP. I’d been interested in creating a new zine for a couple of years but didn’t have a real focus for it, so this was a perfect opportunity to create something that would underline what Dead Unicorn Ventures was about. It was incredibly heartening to have women we admired and respected contribute to the zine. When looking for outlets I was amazed to discover how many alternative/counterculture bookshops there still were in the UK. Most of these shops – anarchist, feminist, gay – were incredibly enthusiastic about the zine and took copies to sell, in their shops and at book fairs. The zine has been favourably compared to Valerie Solanas’ classic/notorious S.C.U.M. Manifesto, which is quite an honour. In the wake of the gig, we were interviewed by students at Penwith College, an excerpt of which is on YouTube, and by Cornwall Live.

At the time of writing, we’re working on issue 2 of the zine. It’s been delayed by the pandemic, amongst other things, but a fair few pages have been drafted. We’ll resurrect it when we’re ready.