I am not British.

I’ve never felt part of the country I happen to have been born in. To me it has always been a matter of having been born on this piece of land as opposed to that piece of land. Which is why I’ve never had a problem with people moving around the world to try and improve (or save) their lives. At my abysmal comprehensive school it was made clear how different I was: an identical twin. A punk. Not like other girls. I was surrounded by racists, anti-Semitics and homophobes, with the teachers standing by and letting all the bullying go on around them (and sometimes joining in). I voted Remain in the EU referendum on Thursday for two principles: co-operation and looking outward. This island country was insular enough. Now the disastrous result has been declared, after a campaign based on lies, inciting racial hatred and even murder: one White far-Right sympathiser chose to blame immigrants, refugees and the people who help them for his nondescript life and shot and stabbed to death Jo Cox, one of the few MPs in the UK who appeared to be a decent person. The country is in the hands of the ultra-Right – at all levels. Racial hate crimes have shot up over the last few days – big, White men are telling non-White-British children to ‘go home’ and are throwing bricks through the windows of Turkish and Spanish shops. For them, leaving the EU really means that anyone not exactly like them should leave the UK. It is a battle between the thinkers, the creative people, those who have travelled or educated themselves – and those who have chosen not to, who have no imagination, who fear the Other. It transcends class. I don’t want to live in England anymore, but it’s not practical for me to move to the obvious choice – Scotland, a far more compassionate country which may well vote for independance from the UK and make its own relationship with the EU. In some ways this is reminding me of the backlash the gay community (in London at least) suffered after the Labour landslide victory in the 1997 General Election, after Labour’s pledge for equal rights for us. All my friends were attacked. I talked my way out of several beatings. It was a bad time, but this feels much, much worse. All I can do is reflect this in my writing (something I’ve always done anyway) and intervene, as I have done before, when this stupidity rears its head on the street or anywhere, at least until I can get my bearings and work out what the future holds.

Short story ‘Grave Goods’, from Storylandia, has now been added to the site. 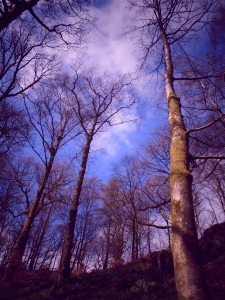 I’ve now completed the first draft of Dark Fire and am over 1,000 words into a new story, Parasomnia. I’m finding it difficult to not write at the moment, despite my feelings of isolation as a writer. I suspect a great help has been the March 2016 issue of Fortean Times, a magazine I used to read regularly. This particular issue has a feature on the Occult and Fortean sides of David Bowie’s work and a piece on J G Ballard’s fascination with Ronald Reagun in the late 1960s and how controversial his mock psychological study, Why I Want To Fuck Ronald Reagun was when it first appeared in print. It’s another reminder of how much of an influence Ballard has been to my writing, especially when I first began in the early 1990s. I once wrote a mock airline handbook on how passengers should approach plane crashes, which sadly is long lost on a floppy disk somewhere. ‘Parasomnia’, relates to that early work in some respects, although I doubt if Ballard’s influence is obvious in the story. I want it to be a companion piece to Bedlam’s Way, a very early story of mine which was originally selected to appear in a fiction supplement in the New Statesman magazine. The supplement never appeared (with, of course, no explanation from anyone as to why) but the story was published in Saccade magazine in around 1996.

As well as using methods to get into a particular headspace for the purposes of writing, I’m finding that what I’m writing – and when reading older pieces of my fiction – is inducing strange headspaces, too. Does that mean I’m successful/a ‘good artist’? Good art, after all, is about accurately portraying whatever it is the artist wants to portray. Additionally, I’m wondering whether words have the potential to act like a Sigil, when put together in a certain order under certain conditions. At their best, I suspect so, although time will tell whether my own work achieves that in anyone other than myself.

All images and text ©Julie Travis