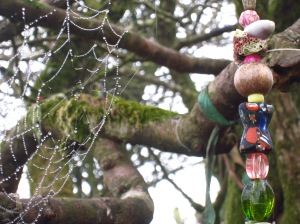 I’ve spent some time reading The Occult by Colin Wilson and it’s been reassuring to find that most of the beliefs I’ve had over many years are or have been shared by various peoples over time. No surprise that most of them are from outside Europe – my own experience is of dismissive or condescending attitudes towards beliefs that can’t be backed up by scientific experiments (except for Christianity of course, although the existence of more than one Universe has recently almost been proved by A Man In A Laboratory and is therefore more worthy of being taken seriously). I’ve learnt to be cautious: the possibility of astral travel via dreaming, for instance, is something I’d never even spoken to anyone about due to the closed minds of most people. This doesn’t mean I won’t be exploring such things in future stories – the only safe place I felt I had – but it’s occurred to me that I’m living in the wrong part of the world as far as belief systems go. However, the far west of Britain – Cornwall, Dartmoor or Cumbria – is where I feel centred. It’s where I’m meant to be now, so I can’t see myself leaving. I’ve had a bit more contact recently with writers via the Internet, which has been doing me good, so I don’t see why I can’t make contact with others of a more similar spiritual nature.

After what seems like endless re-writes over several weeks, my two latest short stories – Scar Tissue and Perihelion – are close enough to being finished to be put aside for at least a few days so I can read them more objectively and, hopefully, make final adjustments. Perihelion will probably get (another) new title – In Holes and Corners – as it rests more comfortably with the story. Sometimes several title changes are needed, although I’m finding these days that a simple phrase or word can be enough to inspire an entire story and it will therefore begin with the title. Inevitably, I’ve been hearing a lot of Kate Bush every time I turn the radio on and from my own collection Ariel has again been forming a good backdrop for writing.

2 thoughts on “Waking the witch”

This site uses Akismet to reduce spam. Learn how your comment data is processed.