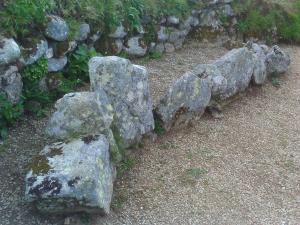 The Penzance Literary Festival is nearly here, and the festival website now includes profiles and some information. There’s still some uncertainty as to who will be chairing, but hopefully this will be confirmed shortly. My father will be taking photos, so some may appear here when I do a PM on the event.

“Short-story writers Rosanne Rabinowitz and Julie Travis will read from and talk about their genre.

Slipstream fiction describes writing that crosses the boundaries of the science-fiction / horror / fantasy / speculative genres.   Some also call it weird fiction. Many women write this kind of fiction, but their stories are more likely to be seen in the independent press or on the Internet than in mainstream book shops. Influenced by all or none of the above genres, their stories are dark, disturbing, imaginative and, above all, weird. This event will be a talk with readings and lots of discussion. We’d particularly love to hear from other writers engaging in these genres, and also from readers who want to find out more about them.

Rosanne Rabinowitz
Does Rosanne write literary or genre fiction, slipstream, social surrealism or just weird stuff? Whatever you call it, there are helpings out in anthologies such as Never Again: Weird Fiction Against Racism and Fascism, Conflicts, The Horror Anthology of Horror Anthologies and The Monster Book for Girls. Rosanne’s novella Helen’s Story will be released by PS Publishing in Autumn 2012.
Rosanne lives in South London where she engages in a variety of occupations, including the occasional occupation of the local town hall. She has been a life model, part-time mental health worker, full-time doley and editor of the late great Bad Attitude, a feminist mag ‘devoted to the overthrow of civilization as we know it’. As well as writing she works as a freelance sub-editor and oral history researcher.
Julie Travis
After spending her youth watching horror films, writing fanzines and playing bass guitar in a punk band, Julie began writing horror and dark fantasy fiction. Her short stories and novellas, which have been compared to Clive Barker, Thomas Ligotti and the Stephen King / Peter Straub collaborations, have been published widely in British and North American science fiction and horror magazines, several anthologies and the first issue of Kzine, a Kindle fiction magazine. Born in London in 1967, she has lived in West Cornwall for the last decade.”

6 thoughts on “Slip Into Something Uncomfortable: update”

This site uses Akismet to reduce spam. Learn how your comment data is processed.