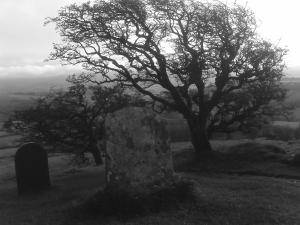 A week on Dartmoor has proved restful and inspiring in equal measure. The first draft of Pieces is now finished. And it’s going to be a two-parter. Most of my stories end in a certain place and there’s no need to return, but Pieces has turned out to be different, (Darkworlds will eventually have at least another part to it, but that has only become necessary long after the story was written). It started as a simple horror story but has become far more complex, although it still has the gruesome elements I began with. And the setting is back in London and the tattoo/piercing/body modification counter-culture that still exists despite the current fashion for meaningless tattoos. 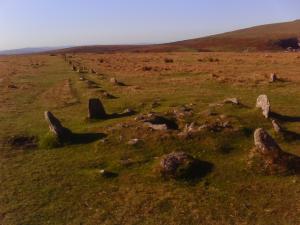 Most inspiring in my week away was being in close proximity to Brentor and my first visit to Wistman’s Wood. Brentor is on the major ley line that appears near Land’s End and cuts through much of Southern Britain and Wistman’s Wood is a bizarre area of gnarled, skinny oak trees surrounded by moss covered boulders. It sounds like the kind of place that could be quite frightening, and it has legends of Hell hounds bounding around it at night, but I found it beautiful and peaceful. Brentor pushed my energy levels up, as it, and other places like it always do and hopefully this will all be reflected in the story. Dowser Hamish Miller got me interested in Brentor and I thought of him as T and I walked around the church. The lava tor sits on the far Western edge of Dartmoor and we could see back into Cornwall and out across Dartmoor on the clear, cold morning. Earthworks in the fields below are also visible from the top. I don’t know how old they are or what their purpose was, but the spirit of the place is almost touchable. 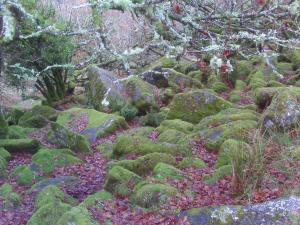 Now home, I’m continuing to look for a female actor to do a reading for me; Rosanne Rabinowitz is possibly organising an event for the 2012 Penzance Literary Festival on the subject of women and weird/speculative fiction and has asked if I want to be involved. It’s a great idea and I’m excited about it, but I know that me reading one of my stories would not work. When Katy Darby (of Eine Kleine Theatre) read Perpetual Motion at the Poetry Café in London, it really showed the story at its best, so I’m emailing local drama groups and companies in the hope that someone will go for it.

Music: I’ve been hearing some excellent modern dark ambient/experimental music, namely Matthew Shaw, Fougou and Susan Matthews. Shaw’s latest cd, Lanreath, was recorded in the Cornish village of the same name, which is close to Duloe stone circle. It brings on the right frame of mind for writing. 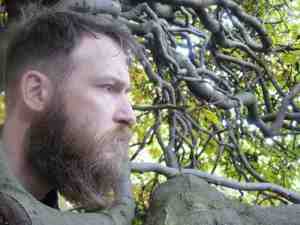 With the death of Jhonn Balance seven years ago, in a fall at his home in Somerset, came the end of Coil. And with the end of Coil, a band/project inhabited by many over the years but with Balance and Peter ‘Sleazy’ Christopherson at its heart, came a loss that becomes ever more evident with time. Coil created what I’ve always thought of as dream soundtracks, but that barely describes the depth of what they did. Some gothic, Industrial beginnings led to the original score for Hellraiser, to some dark ambience, to meditative and mind-expanding ‘moon musick’. Balance explored the occult, Death and What Comes After in much of his work. It was his attitude that initially attracted me to the band, his proud, defiant sexuality and interest in magick kept me hooked even when I wasn’t so keen on the music (Love’s Secret Domain, with its acid-house tinge, was really the only album that didn’t completely enthrall me). Although that voice, that beautiful, golden voice, was always irresistible. Balance has been described as a ‘musical alchemist’ but I’ll remember him most for his spiritual and magickal exploration. His relationship with alcohol and his often fragile mental state perhaps doomed him to an early death; at 42, he still had so much more to do here, and it’s still difficult to think of the world without him. But he has moved on – to whatever comes after – and perhaps its more our loss than his: Barbara Erskine wrote in Daughters of Fire, “…like the Celt, I also believe in a form of reincarnation… that the soul, on occasions, splits into three parts on death, one part to reincarnate, one to go to the Blessed Isle and one part to enter another life form – perhaps a bird or a shooting star.” The Woodland Trust memorial to him, situated near Bassingthwaite Lake in the Lake District, is in a place he loved and is a beautiful, fitting tribute.

Sleazy was the quieter, more stable half of Coil, though no less gifted than Balance. After Balance died he somehow carried on and managed to complete the band’s last studio album, The Ape of Naples, in 2005. He relocated to Bankok, continued making music and began to enjoy life again. A few months before his death (in November 2010) he posted a short film on Myspace, apologising for having cancelled a gig due to illness. In the film he claimed it was ‘nothing serious’, but somehow it didn’t ring true, and this quote, from 31 July 2010, seems to bear that out: “We are all only temporary curators of our present bodies, which will all decay, sooner or later. In a hundred years or so all the humans currently alive will have died. I take great comfort in knowing, with certainty, that thing that makes us special, able to enrich our own lives and those of others, will not cease when our bodies do but will be just starting a new (and hopefully even better) adventure.” He passed away in his sleep, in his own bed at home and no cause of death has been officially announced. I have my own theories but he and his loved ones deserve their privacy. With him gone, the void left by Coil has become immeasurably bigger, The Ape of Naples even sadder and more difficult to listen to. Coil were with me for around half my lifetime, their influence on every part of my life immense. I doubt any ‘band’ can take their place and perhaps I shouldn’t even look for someone to do so. 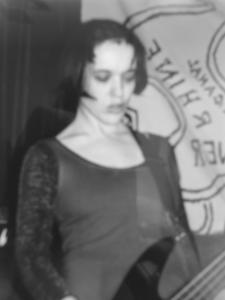 Lisa Cook played bass guitar in Sister George, the leaders, as such, of the British Queercore scene of the mid-1990s. I got to know her after doing an interview with the band (which turned out to be their last) in guitarist Lyndon Holmes’ flat in Walthamstow. I’d seen them for the first time at a pub in Camden, North London, a couple of weeks after I came out. Gay punks! I was smitten. I played pool with Lisa, went to a few gigs with her and Lyndon and then girlfriend Yas (guitarist in Mouthfull), including Huggy Bear’s last gig. She was interested in my writing and made me promise that, should I ever make a film (a version of The Guinea Worm was being discussed at the time), she could play a zombie, whether or not the story included one. After Sister George broke up, she and Lyndon formed Kidnapper, a short-lived but brilliant pop band. She gave me their demo tape; it was full of promise but the band had serious personal problems and split up after releasing one single. I saw her at Club V (queer/indie club, late 1990s) but then she left London and I lost contact with her. She had a partner at the time of her death (in January 2008, of cancer) but my attempts to get more details have come to nothing, but she was far too young to leave us. We were friends for a time and Sister George were a truly great, feisty band that made it easier for me to come out. I’ll remember her with affection and sadness.