Troy Books has just published the memoirs/guide to witching by West Penwith witch/wise woman Cassandra Latham Jones. I haven’t read it yet but it’s something I must get hold of. Cassandra led the main parade at Mazey Day for many years, casting a spell for good weather and was teazer for Penglaz at the Montol (Winter Solstice) festival in Penzance. It should be a fascinating insight into modern witchcraft. Hallowe’en is approaching and year by year the real meaning drifts a little further away. The de-Paganing of the event, to the extent that it’s just a fun night for children to dress up as their favourite horror/Harry Potter character and collect sweets, is sad and frustrating. Cassandra’s book would be a far better ‘treat’ gift!

On a recent trip, taking an old friend to Boscawen-Un stone circle near Crows-an-Wra, we found what seems to be another sacred site. Not noted anywhere, but recently cleared, it resembles a burial site of some kind, with a tiny stone circle. The photo above shows the nine stones but not the scale – it’s just a few feet across. What it actually is and when it was created is something I’ve yet to find out, but the ‘vibe’ at the place is amazingly calm and peaceful, the energy even better than at the nearby site.

POST SCRIPT (30 Oct): The comment by Troy Books includes a link to The Megalithic Portal, which has some details: the site is Creeg Tol, a natural rock formation. The stone circle is generally agreed to be reasonably recent, but no one seems to know any more than that. The vibe at the site, especially before it was cleared, is also generally agreed to be quite horrendous. People talk of being watched from the hole in the rocks. I’ll be going back there soon to check it out in more detail. 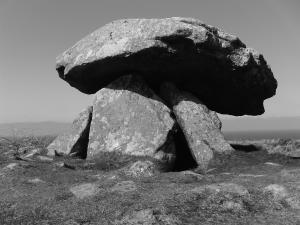 I have it! I have the book.

I finally got hold of Mister B. Gone by Clive Barker but have allowed myself only to read one page. It has a smattering of humour but no trace of whimsy – yet. I’m halfway through Daughters of Fire and must finish it. It’s very different to the fiction I usually read (and any fiction is different to what I usually read). I’d say it was lighter, but much of it concerns pre-Roman Britain and some very spiritual stuff concerning Celtic beliefs regarding death and the soul. So perhaps the style is lighter (and therefore much more commercially successful) but the subject matter is not. It seems Barbara Erskine experienced quite a spiritual awakening while she was researching/writing it. I haven’t interviewed anyone for years now but if she were to visit Cornwall I think I’d make an exception and join the queue on the phone line to her agent.

After a couple of days away from Everything amongst the sand dunes on the other side of the peninsular, I’m organising myself to hopefully continue the momentum that’s built up over this year. I’m almost finished on a final run through of The Falling Man – more tweaking than I thought still to do – because I want to get it out to a magazine this week. My newest story, Pieces, is changing as I write it. Not in the general premise, but some of the detail needs to be more… apocalyptic. Blame the presence of a new Barker book in the house for that, plus Coil’s Winter Solstice: North continually playing in the background. And after some thought and encouragement from various people, I’m going to start work on part 2 of the Darkworlds story (currently on this website’s ‘Short Story’ section). My life is very different to when I began writing the original, so I’m not totally convinced of how successful it will be, but it feel like the right thing to do to try.

And how is Kzine faring, I wonder? I have no idea how popular Kindle is, either with writers or readers. The price of buying the magazine is certainly extremely good value although I notice version two of Kindle is already available.

A look at the outside world has me remembering some of the things that I miss about London. Strange events happen here but we don’t have Daniel O’Sullivan leading a procession of bricks made by Serena Korda out of the dust of dead folk. This is just the kind of thing I’d have gone to were I still ‘living’ there. And I’m not sure where he’s currently located (Spain, perhaps?) but Ian Johnstone is doing new work and performances. I dearly wish I could be present at something of his.